The complete discrimination and process of Aadhar Card.

Many countries around the world use a unique identity system whereby each citizen receives a number that hold all details pertinent to their identity under it. The government of India has also sought such a system India and have called it Aadhaar, which is also referred to as UID. They then intend to use this number to provide benefits to the citizens through the Aadhaar number. These benefits could include things like various subsidies that the government provides, include things like the subsidy on gas. The project is run by the Unique Identification Authority of India (UIDAI) and was introduced in January 2009. The project has faced some problems since its inception with claims being made that the project was not constitutionally sound as it involved the collection of biometric data of the citizens by the government.

The general idea of the program is to issue every citizen with a unique number to help identify them and provide them the benefit of schemes announced by the government. This unique identity involved the issuance of a 12 digit Aadhaar number and an Aadhaar card. The idea was also that the project would also serve as an identity card for everyone and would then be linked to other services like UAN, bank accounts and pension schemes.

What is Aadhar Card ?

The Aadhar card is a card that is issued once the application has been approved and an Aadhar number has been assigned. If you have already received the Aadhar number and want the card in a hurry, then you can download it as a pdf file using your enrolment number or the Aadhar number. It must, however, be noted that having a card is not mandatory to avail the benefits of Aadhar.

The purpose of the Aadhaar was to make it simpler for people to avail government subsidies and have one number that would work as proof of address and proof of identity. Another reason that the government has cited for the creation of this was to help curb illegal immigration to the country. What Aadhaar isn’t is a card that can replace the need for drivers licences or passports. It also does not identify a person as part of a family nor can any individual own more than 1 Aadhaar number.

The main objective of the creation of Aadhar has always been to create a unique and universal identity card for the citizens of India which would help negate the requirement of different documents for availing various services.

The government of India provides certain subsidies to particular citizens however there have been instances when such welfare has been misused. The Aadhaar number was intended to help solve this problem and ensure that those who require welfare, and are eligible for it, get it. Aadhar is also supposed to be the identification that would prove a person’s eligibility to enrol in government programs like Right to education and the Sarva Shikhsha Abhiyaan. 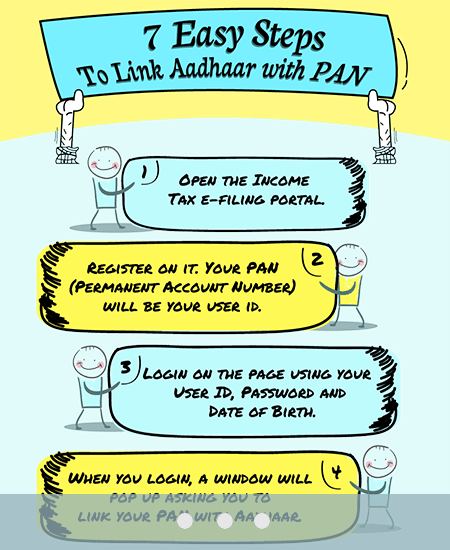 According to the PAHAL DBTL Scheme, those people who had an Aadhaar card could use it to avail a subsidy on gas cylinders. To be able to avail it, they would have to have an Aadhar card that is linked to the gas connection and also to a bank account.

When it comes to getting new landline or cell phone connections, the Aadhaar card can be used to replace KYC documents like identity proofs and proof of address.

The advantage of having a bank account linked to the Aadhaar number is that when and if you qualify for a government welfare scheme and you need to receive monetary advances, they can be transferred to the linked bank account post haste.

The Aadhaar card comes with no validity conditions and remains valid throughout the life of the person.

How To Link Aadhar With PAN To File Income Tax

With the deadline for filing taxes being postponed to August 5, there is still time to link adhar card with PAN. Those who have not filed their IT returns yet because they could not link aadhar with PAN, can still do so by following a few simple steps.

Steps to link Aadhaar with PAN for IT return

Contrary to popular belief, Aadhar is not just a card. The Aadhar number is the unique number under which an individual’s details are stored.

What Is Aadhaar Number?

The Aadhaar number is the 12 digit unique identification number that a person can take, under which they can consolidate other information about them such as bank accounts held, passports, phone connections etc. It also hold biometric data about the person to whom it is issue.

Format of the number

When a person is assigned an Aadhaar number, they get a 12 digit number assigned to them. There are 12 numbers in this digit so that the identity of 100 billion people can be stored under various numbers. These 100 billion identities are provided by the first 11 digits of the Aadhaar number and the last digit is meant as a check-digit to help prevent errors in data entry.

The card issued in association with the Aadhaar number displays the basic details of the person. These details include:

There is a misconception about Aadhaar and it is that the card is what everyone needs to get. The truth is that the main thing with Aadhaar is not the card but the number. That is what holds the key to a person’s identity. It is also not necessary that you have your card in order to avail the benefits of Aadhaar. Quoting the number alone should suffice.

Aadhar is supposed to be a number that can help those residing in India, have one document that can serve a multitude of purposes ranging from a proof of identity to a proof of address. It is something that can even serve as the person’s gateway to access special schemes announced by the government. While it is not mandatory to be in possession of an Aadhaar number, there are some eligibility criteria that people desirous of getting Aadhar numbers have to fulfil. There is no overly technical or complicated list of requirements that you will need to fulfil. It’s all really quite simple as you are about to see.

When it comes to the question of eligibility, one thing needs to be kept in mind and it is that the card is just meant to establish a person’s identity. It does not equate to Indian citizenship and that is exactly why it is available for resident Indians, non-resident Indians and even foreigners residing in India.

The specifics of Aadhar eligibility are:

Every single person living in India, irrespective of race, religion or gender, is eligible to apply for an Aadhaar number. There is even no need to be part of a particular segment of society to be eligible.

Even minor are eligible to apply for an Aadhar card though in their case a birth certificate is required along with the proof of identity and address of the parents. They will also have to be 1 year old before they can be enrolled. Once they have their UID, they will need to update their biometric data once they turn 15 years old.

Even a non-resident Indian is eligible to apply for an Aadhaar card so that they too can participate in the convenience that this system promises to provide.

No matter your situation, as the previous words have made abundantly clear, if you live in India then you are eligible for a UID and here is how you can get yourself one.

How To Get An Aadhaar Card

The Aadhaar number is not something that can be applied for online. Citizens can only go online to book an appointment at an Aadhaar centre. Follow the below Process to get aadhar card

These are some of the most basic requirements that you will need to abide by to get an Aadhar card.

There is just one form that is related to this service. It is known as the enrolment/correction form and can be used to apply for a new Aadhaar number or to have the details of an existing number corrected. The form will collect the basic information of the person along with information about the documents that are being submitted in the capacity of supporting documents.

This is a service that is being provided for free and has no fee or charges associated with it.Aadhar is a service that is intended to provide the residents of India with an identity card that is valid throughout the country and is treated as a standard beyond question. It is also a card that is meant to make it easier to avail any and all benefits that the government plans to issue. These two facts alone make it a good idea to get an Aadhaar number even though it is not mandatory at the moment.

How to apply for Aadhaar card? Aadhar card is an identification card that contains one’s demographic as well as biometric details. In order to apply for Aadhaar card, one needs to eligible for it.Applying for an Aadhar card is completely voluntary. The major part of the application process consists of visiting the enrollment centre and booking an appointment online. Learn about the application process, the registration process, and documents to be submitted and availing Aadhar card.