The country’s largest lender, State Bank of India (SBI) has slashed charges for non-maintenance of Average Monthly Balance (AMB) in savings accounts by nearly 75 per cent.

The revised charges will be effective from April 01, 2018 and will benefit over 25 crore customers. The lender said that the decision of slashing AMB was taken keeping in view the feedback from various stakeholders.

This decision follows severe criticism that the bank earned hefty income of Rs 1,771 crore in just 8 months from depositors who failed to maintain balance in their bank accounts. The amount was more than SBI’s July-September quarter net profit of Rs 1,581.55 crore and nearly half of the Rs 3,586 crore it earned as net profit April-September.

In October last year, SBI had slashed service charges on not maintaining monthly average balance by a whopping 20-50%. Earlier, metro and urban customers were charged Rs 40 to Rs 100 rupees for not maintaining average balance. This penalty was brought down to Rs 30-50. The charges at semi-urban and rural centres were also revised to Rs 20-40 from Rs 25-75.

SBI restored (AMB) charges from April 2017, after a gap of 6 years and then revised it downwards in October after feedback from stakeholders.

The bank excludes Jan Dhan accounts, basic savings bank deposits (BSBD) accounts, pensioners, beneficiaries of social benefits from the government and accounts of minors from the MAB requirement.
“Bank has always focused on keeping the interests of its customers first and this is one of our many efforts towards fulfilling customer expectations. Bank also offers its customers to shift from regular savings bank account to BSBD account on which no charges are levied,” said PK Gupta, MD, SBI.The Bank has a very strong deposit franchise having 41 crores Savings Bank accounts out of which 16 crore accounts under PMJDY / BSBD and of pensioner/minors/social security benefit holders were already exempted. In addition, students upto the age of 21 years are also exempted. 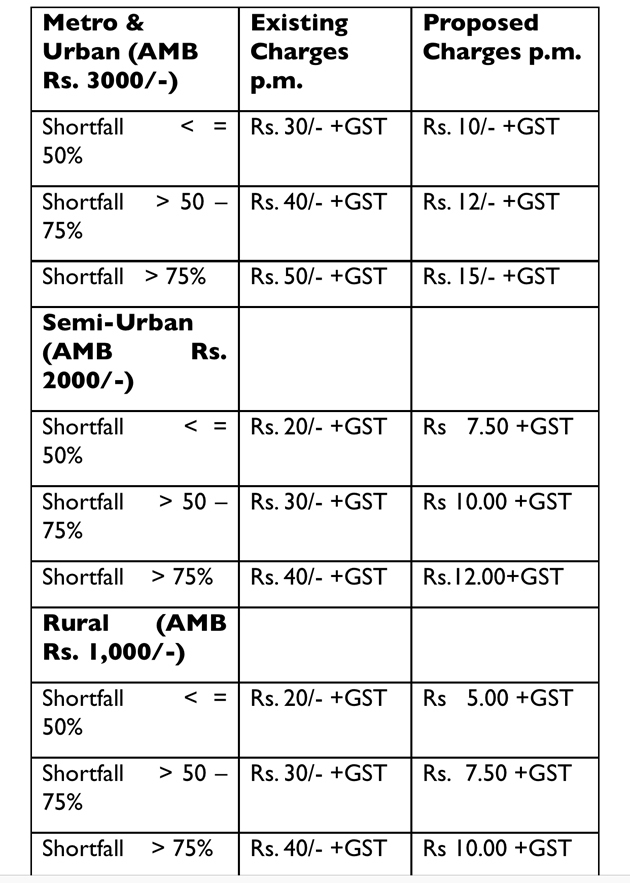 How much minimum balance you should have?
For metro cities, initially the minimum balance to be maintained was Rs 5,000, but later in September 2017 the bank brought it down to Rs 3,000. Currently, in urban areas it’s Rs 3,000, while for semi-urban and rural areas, it is Rs 2,000 and Rs 1,000, respectively. The bank had exempted pensioners, beneficiaries of social benefits from the government and accounts of minors from levy of these charges.
Source by:- economictimes
Share: